Skip to content
Home > Uncategorized > Things to consider when buying a pair of shoes for tennis
Published October 2, 2015 by Ricky R

Things to consider when buying a pair of shoes for tennis 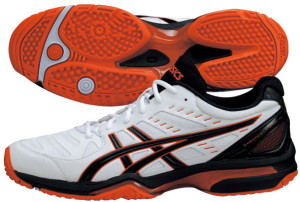 There are 4 types of surfaces tennis is played on and each surface requires a different type of shoe. This is generally determined by the style of tennis you play, i.e. serve and volley on a grass court vs short rallies on a hard court. Having said that, these days it is possible to get a pair of all surface tennis shoes that would work on both hard and soft courts.

Those who tend to play a lot of tennis tend to stick with a different pair for hard and soft courts.

The court is made from plastic or cement and is a fast surface requiring short rallies and hard serves. US and Australian opens are played on this type of surface.

On a hard court, a tough outsole, cushioning and bounce back and a tough upper are needed. A shoe that has these 3 things would handle the demands of a hard court well because this type of court can be unforgiving on legs and feet any shoe chosen should give stability when moving around on the court.

This court is made out of grass and has a similar colouring to a golf putting green. Players who are good at serve and volley players and rush to the net to take advantage of the opposing players slower foot speed do well on this type of court. This is the fastest of all surfaces and Queens Championship and Wimbledon are played on this type of surface

Shoes used to play tennis on grass courts do not need to be as sturdy as ones used for clay and hard courts as the ground is softer. Nonetheless tennis shoes used on grass courts need to have a good grip, have a flatter outsole and a flexible upper.

The ball moves slowest of all surfaces on clay courts. The court itself is made from crushed natural materials like shale and brick. This type of court favours baseline players and courts used in the French open are made of of clay.

For clay courts, footwear with lateral support and stability is needed as there are lots of side to side movement before setting your feet for the shot. Along with this, other things needed in a shoe for clay court play is good grip for traction, well designed outsole that doesn’t get clay trapped in the grooves, durable sides and a tight upper.

Most tennis players tend to play indoors. These courts are made from things like rubber and some have a suspended surfaces which help avoid knee and ankle stress as it has shock absorbing qualities. These courts are generally a medium speed surface.

For indoor tennis, a general tennis shoe would be fine to use.

The fitness level of the player should also be taken into account when purchasing tennis shoes. A player who has a good all round fitness, i.e. exercise regularly and may take a protein supplement to help build muscle would need a different pair of shoes to one that although may have less muscle has a lot more agility in the way they move their body.