Alrighty, who’s ready for story time?  If you’ve been following this blog, you may already know that the type of shoes you wear is sooooo important to your health.  The type of shoes you wear can make or break your physical well-being when engaging in sports.  Okay, so maybe that might be A LITTLE dramatic, but having the correct shoes for your particular activity can save you some physical pain.

I wanted to share a personal story with you guys that conspicuously illustrates why you should avoid bad shoes.  A long time ago, back in my high school days, I used to run Cross Country in the Fall, and Track during the Spring.  Back then as a high school student I was pretty broke.  I couldn’t really afford the best quality shoes.   If I wanted fairly expensive shoes (in the range of $50-$75), they were bought for me from parents or relatives.  I started working part-time at my aunt and uncle’s restaurant at the beginning of 8th grade, so throughout my high school years, I had a bit of disposable income to sometimes purchase my own shoes. 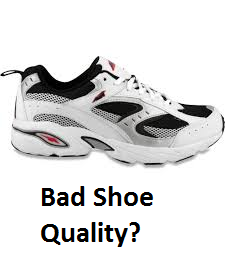 As you can imagine, since I didn’t have much money, my initial mindset was “the cheaper, the better!”  I remember buying a cheap pair of shoes from Wal-Mart for my first season of track.  They worked out surprisingly well.  They were pretty comfortable and lasted throughout most of the track season.  The only difference that I noticed for my $15 pair of running shoes compared to $50-$75 pairs of running shoes, was that the $15 pair just didn’t last as long.  I noticed that they wore down much faster than a high quality pair of Nike shoes.  I, however, didn’t notice any other differences.  I didn’t feel any foot pain.  No leg pain.  No bruising.  No blisters.  No major differences in comfort level.

Years later, after my college years and several years into my professional working career, I started getting back into running and weight lifting.  I decided to try another cheap pair of running shoes from Wal-Mart, but this time for $20.  I put a lot of miles on those shoes!  In fact they lasted me almost a whole year.  I should have replaced them sooner, but they were working out really well and lasted surprisingly long.  I didn’t have any complaints whatsoever.

Having that same “cheaper is better” mindset, I bought my next pair of running shoes from Wal-Mart for $15.  I used them consistently for about 6 months with no issues.  Then I took a 3 month break from exercising and just relaxed.  After that 3-month hiatus, I decided to get myself a gym membership and start running again.  I was doing well for about a month.  I then came face to face with my first ever back pain experience!  I hit the gym one day and was on the treadmill for about 45 minutes, which was a typical run.  Throughout my run I noticed some slight discomfort in my lower back.  It was a weird feeling.  It wasn’t painful by any means, but it just a little uncomfortable.

As you can imagine, being the tough guy I like to be, I fought through the discomfort and just continued to finish my run.  After I got off the treadmill, my back felt somewhat sore, albeit nothing too painful.  The next day, however, my back was very sore.  I wasn’t in excruciating pain by any means, but I was definitely sore.  My initial thought was that it would just go away after a day or two.  Unfortunately, the pain lasted for a week.  Then another week.  Then another week.  The back pain lasted for another two months.  I literally could not work out for a whole two months because of that back pain.

Although there are plenty of things which could have caused my back pain, such as the fact that I’m getting older (I’m in my mid-twenties now), or the fact that I took a break for several months before hitting the gym again, I have a strong feeling that my quality of running shoes was the culprit.  It may not have been the sole reason for my back pain, but I’m almost certain that it was a contributing factor. 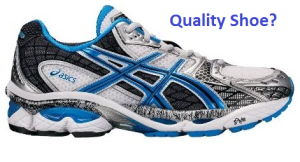 I recently consulted a colleague of my mine, who worked in the shoe industry for 17 years, who confirmed that the type of shoe you wear makes ALL the difference.  He told me that even wearing running shoes as walking shoes could cause soreness or joint pain throughout your body.  This put things into even great perspective for me.  After talking to my acquaintance, I felt like an overweight man who had just stumbled upon the best PhenQ review on the internet and suddenly realized a key to helping him lose weight.

It’s because of this experience that I’m now an advocate of using quality running shoes when I run.  That’s not to say that you can’t get some value out of a cheap brand of Wal-Mart shoes, especially if you’re younger and still in your physical prime or if you really can’t afford $60 for a a pair of shoes.  I’m just saying that we shouldn’t underestimate the value that comes from taking the time to select a good pair of shoes when it comes to running.

If you need further proof, check out George’s video below: